Origin of the Gongs 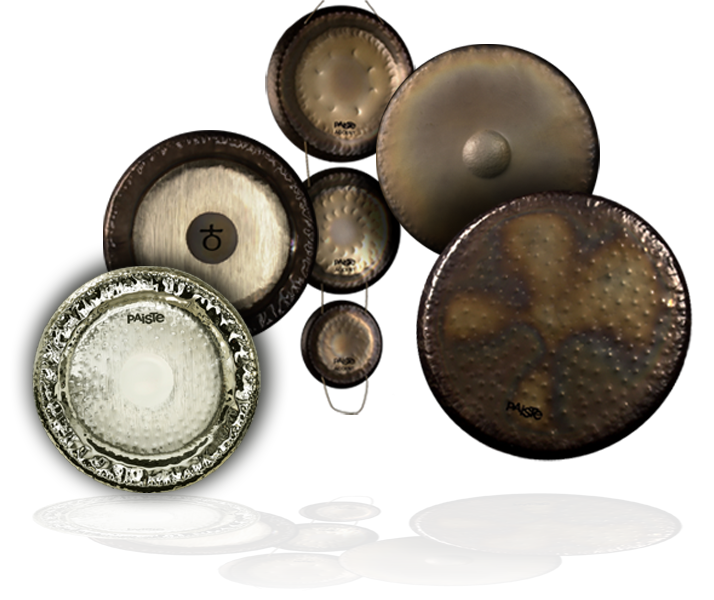 Gongs belong to the oldest and most important musical instruments of South East Asia. Their origins may be traced back to the second millennium B.C., but it is assumed that the gong is much older. In Chinese history, gongs are mentioned around 500 A.D., attributed to a nation called HSI YU between Tibet and Burma during the reign of Emperor Hsuan Wu.

Historic research provides us with four main centers - Burma, China, Annam, Java - at least 7 gong shapes and sound structures stem from these regions. Only few families knew the tradition of gong making as it was passed from generation to generation. The art of making gongs was veiled in a sense of magic. Gong makers believed that a gong could only succeed with the help of higher powers, and that they were exposed to forces more so than ordinary humans.
The gong was an important element in the lives of Far East people and is still in some countries today. In Asian families, the gong was an attribute of wealth and served as a status symbol. In rites, the gong was used in the evocation of ghosts and in the banning of demons. Touching a gong brought you fortune and strength. In rituals of the Far East, the gong has retained its special significance to this day.
As a musical instrument, the gong accompanied celebrations, funeral ceremonies, songs, and theater plays. In the music of the Asian high cultures, the gong was used as an orchestral instrument. Orchestras with gong plays containing up to 18 notes were not seldom. They were also played in private concerts at residences.
Since about 1790, gongs were used in European orchestras. Since then, the terms "Tam Tam" for flat gongs, and "Gong" for bossed gongs, have become customary. However, the authentic term in all languages of the origin countries is GONG.

The Anatomy of Gong

Depending on where the Gong is struck, it reacts differently with respect to sound.
The following principle applies: 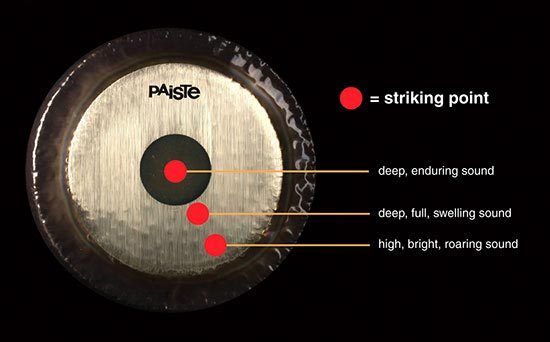 Each Paiste Gong comes with suspension made of string. Gut string is supremely as it minimizes the transfer of vibrations to the Gong-Stand. From time to time the gut string should be examined for wear and tear and, if necessary, be replaced. Each Gong should be suspended so that it may swing freely forward, back, and to the sides without touching the stand. Replacement gut string is available on request.

Here is a video with instructions for replacing a gong gut:

Handling and Transport of Gongs

Every Paiste Gong becomes a valuable musical instrument through the skilful craft and experience of the gong maker. Gongs should be handled with the same care that goes into making them.
The following guidelines apply:
Any kind of pressure, such as stepping on, denting, or pushing on may deform the Gong and cause a change of sound. 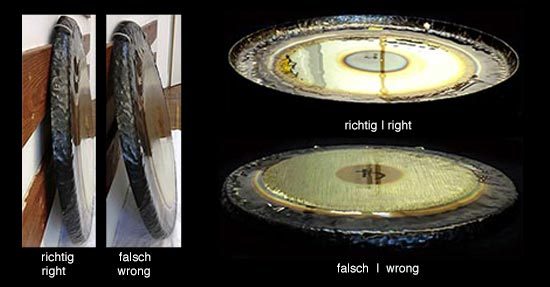 Gongs should not be set on their edge. They may fall over and the rim may be deformed.

Gongs should always be laid face down. For transportation they should be placed within each other, face down. In order not to damage the surface, one should place some form of protection between gongs, such blankets or rubber foam.

The safest mode of transportation are strong card board boxes or wooden crates with Rubber foam or blanket cushioning.

Please do not wear any jewellery or clothes with zips or belts. It is important that metal objects do not touch the Gong.

When you use the flumi, please consider playing the rear of the Gong as the sound is the same and if it does leave a mark it will be on the back.

If you do mark the front of the Gong don't worry but please use elbow grease and a clean cloth to remove it asap.

Gongs should be cleaned from time to time. Dirt, which builds up during set-up, playing and transporting, acts on the Gong like a damper and inhibits its natural vibration.

Each Gong has a wax coating to guard against oxidizing and dirt build-up. During cleaning the way coat is gradually removed and has to be replaced.

For cleaning, do not use grainy or acidic cleaning agents, as well as ones containing ammonia. Cleaning and waxing of the gong should always be done in direction of the shaving (if present) on the gong surface and only with slight pressure. Use colorless and soft cloth. Apply the cleaning agent to the cloth and clean the gong. Rub off any remaining cleaning fluid with two or three more pieces of cloth. Then apply a wax coat. Best suited is a fluid clear wax, such as is usually sold for cleaning and protecting wooden surfaces.