Pablo Casals was the unforgettable master who discovered the Suites for violoncello, defining the limits of performance practice in a wonderfully perfect and memorably irrevocable way, which for decades no one has dared to cross. Hundreds of recordings have been made over the years, masters and virtuosos of the violoncello have come and gone in an ideal relay race to improve and widen the path blazed by Casals. What is the point then of adding yet another recording, moreover performed by an unknown cellist who humbly looks up to the masters who preceded him?

You might find the sense by listening to this CD, forgetting all that you have heard up to now of Bach (beyond the fact that it is definitely one of the few recorded at 432 Hz *). Anyone who tries to play the Suites with a person lying in front of them, and with the intent to accompany him/her in meditation and recollection through music will be forced, while playing, to smooth the rough edges of his ego, just as a stream (Bach in German!) smoothes stones until they become round, and finally sand. Playing softly does not mean playing quietly, but on tiptoe, with respect and while listening to the breath of the person in front of you.

About the recording of this CD:

We don‘t know, however, it‘s on the way. It probably passed by Steinmühle in Upper Austria in early summer 2016, a former stone mill with a stream (Bach) flowing alongside it. The Blaue Saal is a magnificent room, almost cubical, with wonderful light and a magical atmosphere. It is full of instruments for Katharina Flückiger‘s music therapy and musical art.

Throughout the recording, 12 people took turns lying down in front of the violoncello. I imagined cradling them with sound, trying to put their mind on the slow flow of the notes, caressing the heart. Around the borders of the room, in the shadows, those waiting for their turn to lie down or those who had already had their turn were seated.

The decision to perform the Suites in this way is a conscious and courageous approach, while the musical gesture disappears and a path to deep meditation opens up; it is an attempt to demathematize Bach, to take the mechanical aspect away from the mathematical perfection, with the metronome exiled in order to explore new openings between the notes. A musical journey, in the stream (Bach) that becomes an ocean between the walls of what was once a mill, then reconstructed thanks to the generous hands of Peter Wahl. Silence reigns despite the external roar of the water in the stream (Bach). In the same hall where grain was once ground to feed physical bodies, vibration is now ground to feed our souls.

My heartbeat and the rhythm of my breath resonate with the fellow traveller who is lying down in front of me, and intertwine with the writing of the manuscript of Anna Magdalena. And it is precisely this precious document that reveals a new and wonderful great beauty to me, all through the bowing indications of the suites (which many find inconsistent and insufficient). A timeless beauty, alien to technical and mechanical concerns. We absolutely need this timeless beauty, as we are accustomed to systematizing and approving everything; the manuscript of Anna Magdalena is a priceless gift if you make the effort to delve into it. And so, inspired by Albert Schweitzer, in order for the graphic representation to not turn into chaos for the listener, it is vital to not play in slow motion, but slowly.

Music and silence mix in the golden light of the Blaue Saal, in an embrace full of feelings of brotherhood that brings me closer to life. I rejoice in the contemplative calm that slowing down offers me. It is a first step in learning the strength of being slow, it is a meeting with newly born freedom.
Davide Zavatti 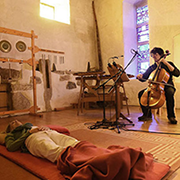 About Davide Zavatti,
born in Forlí near Bologna, took his first cello lessons with Prof. Leonello Godoli. He comes from the tradition of the „Grande Scuola Bolognese“(Serato, Cuccoli, Oblach, Godoli), famous above all for their „Bel Suono“. In 1985 he was awarded the Diploma for Cello at the Conservatorio G. Rossini in Pesaro and deepened his knowledge under Rocco Filippini, Franco Rossi and the Amadeus Quartet. From 1987 to 1989 he also studied at the Stauffer Academy in Cremona under Rocco Filippini.

His musical career saw him play in many well-known concert halls and theatres throughout Italy and all over Europe. He won various posts for cello advertised nationally and internationally (A. Toscanini Symphony Orchestra in Parma, Teatro San Carlo in Naples, International Festival Orchestra in Aberdeen, Scotland) and as a solo cellist worked together with numerous chamber orchestras and symphony orchestras (Orchestra Sinfonica di San Marino, Orchestra da Camera Petrella, Filarmonica Italia, AFSO Salzburg, LSO Leonding). In 1990 he was the initiator, founder and artistic director of the Sadurano Serenade festival for chamber music. From 1989 to 1995 he taught cello at the Liceo Musicale in Forli. He then moved to Vienna, and still lives in Austria today.

His concert appearances include Rome, the Arena in Verona, Milan, Parma, London, Budapest, Athens, Berlin, Leipzig, Luxembourg, the Musikverein in Vienna, and the Mozarteum in Salzburg.

Since 1990 he has also been working in design, graphics, photography and creative concepts. He develops projects that have the objective of giving an impulse for the future, such as in 2012 Concerto SeConDario, 2013 Musae Musicali (www.musae.at), 2014 Sentiero SeConDario and the BachDonau project, as well as in 2015 Abbraccio SeconDario.

More recently he has focussed on Baroque music and its interpretation and has attended master classes for baroque cello by Catherine Jones, Mauro Valli and Ruth Claire Pottinger-Schmidt. He is also interested in applied music therapy elements in art, supported by Katharina Flückiger.

He plays a baroque cello made by Frans Van Dijk, op.XVII, Heiligenberg 1978 and a violoncello from Filippo Fasser, Brescia 2014, a true copy of the ex Paganini violincello by Pietro Giacomo Rogeri, Brescia 1717.