With the octave formula f . 2n (= multiple doubling of a frequency) the Swiss mathematician and music researcher Hans Cousto calculated in 1978 from the orbital and rotational frequencies of the earth, the moon and the planets the corresponding sound frequencies. For this formula the term Cosmic Octave has become common..

For detailed information about the Cosmic Octave and the different planetary tone frequencies please see
www.planetware.de/octave/cosmic-octave.html 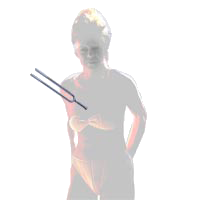 Initially, tuning forks were used to tune musical instruments or the singing voice. For this purpose, the tuning fork is struck briefly, the tone is heard for a few seconds and then the instrument is tuned to this tone. The tuning fork is therefore held here only relatively briefly.

With tuning fork tone puncture, where the vibrations of the tuning fork massage the body cells with the appropriate frequency, the way of tuning fork use has changed significantly. Here, the tuning fork is held for a long time and after being struck, it is placed on the body for minutes, struck again, placed again, and this process is sometimes repeated several times.

The ergonomic grasp pad of the tuning fork models Splus and Lplus enables a more relaxed permanent use. The shape and material of this grip pad allows the tuning fork to be held more loosely, which means that the fingers holding it do not tire as quickly.

The new grips are the result of several years of development, during which various materials and shapes were tested and evaluated by users.

The tuning fork should not be struck against hard objects, otherwise a high overtone - a whistling tone - will emerge. Even with special tuning fork stop blocks made of hard rubber offered on the market, this high overtone can occur. If the tuning fork is rarely used, it can be struck on the ball of the other hand. If it is used more often, the tuning fork can be struck on an object that has approximately the 'softness' of the ball of the hand. A very suitable object is a small terry cloth towel that has been folded and tightly rolled up, with the roller tied at both ends with two strings..

When striking the tuning fork, hold it firmly with thumb, index finger and middle finger on the shaft (or on the grasp pad of the Splus or Lplus version) and briefly strike the end of one of the two prongs with momentum from the wrist on the (not too hard) object. The oscillation period of the tone reaches a maximum time span by this short striking. Do not touch the curvature of the fork with the holding fingers so that the fork arms can vibrate freely.

The tuning forks are made of high-quality steel; for the S and Plus models it is so-called gong steel and for the L and Lplus models a special tool steel. To prevent the steel from rusting, the tuning forks are nickel-plated. The main reason why stainless steel is not used is that it is harder, so that the tuning fork would have a much shorter oscillation period.

About a possible nickel allergy
The tuning forks offered by Planetware are made of nickel-plated steel. Since Planetware was founded in 1990, no problems have been reported because of the material, not even with regard to nickel allergies. Reactions to nickel in allergy sufferers usually only occur with prolonged contact with the skin, e.g. when wearing earrings, while in tuning fork applications the contact is relatively short. But certainly someone can be more or less allergic to nickel.

Our models Splus and Lplus have a grip pad, so there is no contact with the skin when holding the tuning fork. If there is fabric between the person's skin and the tuning fork, no allergy can be caused either.

Frequency accuracy of the tuning forks (Steel vs. Aluminium)

Whether tuning music or in tonal puncture, frequency accuracy is crucial for the highest possible resonance. Accordingly, the tuning forks offered here are manufactured with the highest precision.

Tuning forks made of steel have a much more stable frequency accuracy during temperature fluctuations compared to aluminum. This is of particular importance in the case of tonal puncture, because the tuning fork is held in the hand for a longer period of time and thus it warms up. Steel doesn't change significantly due to body heat, while aluminum expands more, causing the frequency to be slightly lower.

The development team of the Cosmic Octave has always attached great importance to the highest quality. An episode from the early days may illustrate this. The first tuning forks delivered by the manufactory were only manufactured according to DIN standards and so some forks had a deviation of up to 1 Hertz from the specified frequency. We returned these forks and were able to convince the manufacture with the argument that with the octave tone of the earth's rotation, 1 hertz more means that the earth's day would be about 7 minutes shorter than it really is (in fact, in the last 3000 years, the length of the day has increased by about 0.05 seconds).

In order to achieve high quality and the most uniform vibration behavior possible, all Planetware tuning forks are made of the highest quality steel and each individual tuning fork is manually ground (at the top of the fork arms or at the bottom of the inner curvature) until the required precision is achieved (at a temperature of 20.5º Celsius). The more precisely frequencies are matched, the stronger the vibration transmission. In the meantime, tuning forks from other manufacturers are also available on the market. If you value good quality, pay attention above all to the frequency accuracy.

> Back to the tuning fork selection